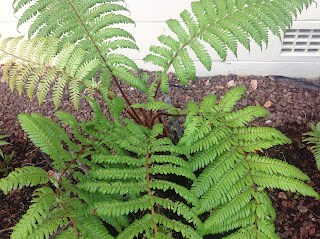 I  just love this plant. It's so 'iconic' that I believe every New Zealand garden ought to have one.
It's latin name is Dickonsonia Squarrosa - squarrosa due to it's sort of squarish shape as seen from the top I suppose. Ponga grows upright and its fronds unfurl from the crown, giving it a shady umbrella that will keep growing until it reaches a  height of 2m high after ten years (according to Palmer's Manual of Trees, Shrubs and Climbers) with fronds measuring 1.5m across. If you cut ponga fern trees down, new plants can grow from the base. Also its roots are creeping, and will send up new shoots elsewhere. Ponga logs are good for fences and raised beds. Give your garden a native look instantly with a few of those, I have two, although most aethetes will say plant in threes...well, pongas from the garden centre aren't cheap and its best to buy them young so they can establish, and are cheaper if you buy them when they are more mature and bigger they can set you back $100.  Mitre 10 were selling small ones for $25-30 and I think they are worth the money. If you have a friend living in the native bush (as I do!) they may able to find baby ones for you that you can have for nada. Pongas are sought after and even Prince Charles has them at Highgrove, where he cossets them in his Southern Hemisphere Garden wrapping them up in winter protecting them from frosts and snow, but here in Auckland you can just leave them au naturel. In the bush they like lowland shady sites so I have mine on the shady southern side of the house. They like general conditions and are very hardy, and they will pop back up even if there's a fire, as tree ferns are one of the establishment plants for virgin forests. Even Australia has them, I was quite surprised to find their bush full of tree ferns as well, among the eucalypts.
This one doesn't come with a Pukeko, maybe next Christmas.
Posted by Selina Chan at 18:49