Am sad because Les passed away on Monday. I wasn't able to go to his funeral, which was today.
I will miss him as he was a kind and humble man who was always eager to help with the St Giles church garden. We weren't able to do much this year as the church board said we couldn't spend any money (which wasn't theirs anyway, it was funded through the Eco Matters  Love Your Neighbourhood Fund) or plant anything. He would always ask me but I had to say no we can't do anything Les. I had to call the project off because of the lack of support from the church board and wrap it up. I did that last week after a somewhat fierce argument with them claiming it was never approved, despite all the evidence that they said go ahead at first.  After much back and forth I decided I just couldn't go to St Giles anymore if the church board was not interested in creating a garden as we still had unspent funds.
It was only last weekend that they said Les was on life support at the hospital, but as I wasn't there, I only heard about it on Tuesday.

Les was a bit of a character and self-confessed chatterbox. He had led an interesting and colourful around NZ and Australia and was always telling me his exploits and what he got up to when he was young. He really enjoyed gardening, going to the library where I used to work, and our trip to Motat, where he ran to catch a moving tram!  One time I bumped into him at the library and invited him the  community meal at the Baptist church. He made a good dinner companion. He was finally baptised in February of this year (after a few years of us praying and urging him) at St Giles so finally found that peace with God he was searching for. Bless Les that he's now found and abiding in his Saviour. I'm sorry that I wasn't able to get to the zoo with him that was going to be our next day out trip. But I'm pretty sure there will be plenty of animals and plants in heaven. 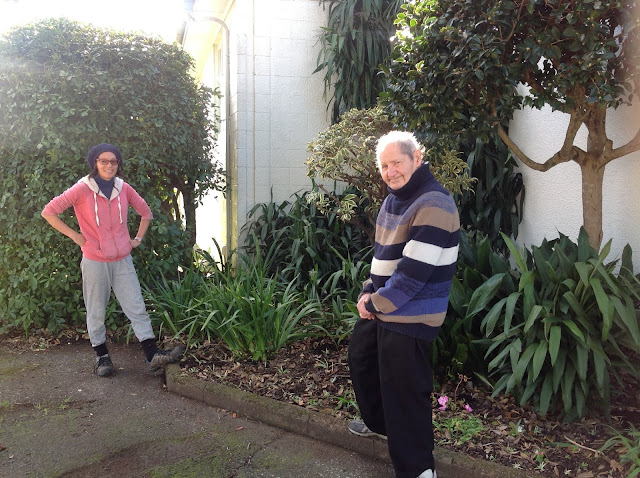