My friend Beth came over on New Years holiday and gave me more bromeliads, and two other baby houseplants. I showed her this blog and she was very disappointed I did not feature her especially in it so this post is all about BETH.

Then she can google it and her name will come up and can tell everyone she went to my Rambling Garden and contributed many of the plants there.
Beth's donated plants include three manukas,  a maidenhair fern, several tree ferns, balsam, fruit salad plant, mother of millions, potted geraniums, spider plants, begonia, flaming katies, various succulents and a peace lily. I am richly blessed to have so much plants for free (although I have given her cups of tea and lunch for her trouble). I almost thought she was going to move in as well since half the contents of her house and garden is here too with shelves and pots, hanging basket, greeenhouse and a rug but it seems like she has other plans.

When Beth came over she noticed a hedgehog under the picnic table looking like it was thirsty and so she gave it some water to drink. Then she had a tour of the garden which has grown so much since she first came here. Mummy Cat is always pleased to see Beth as she talks to her in cat language. 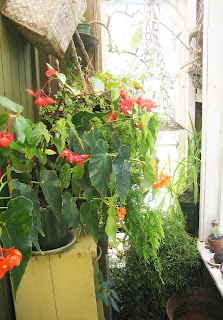 Beth is one of those original 'Tiny Home' people who will be moving her entire house again later this year when some land up in Kumeu is freed up. She says she is going to have a bigger porch so she can fit all her plants on it. I had called it the log box because it looks like one long box. Originally it was in the bush in Swanson which is why she could give me so many ferns.

Left you can see the picture of her deck and plants which all had to be moved! So I am babysitting some of them, mostly the geraniums in pots. (Which aren't in these photos)

They did get a bit of lashing from yesterday's rainstorm but seems to have survived, a branch off the peach tree looks like it has broken off and a pot was smashed, but otherwise the rain was really good for the garden. Hooray no outdoor watering to do and no lawns (for now). 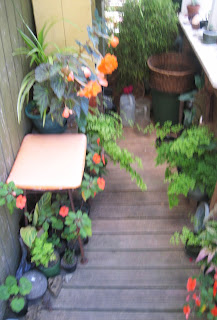 I have potted up a whole lot of spider plants for the Waitakere Gardens hanging garden, ended up with about 30 of them, so that kept me busy and out of the rain. Beth had loaned me several plant books including 'The Conservatory Gardener' which has a section all about trailing plants for indoors so am getting quite good tips from that. I had an idea, if we do have the budget or maybe even just take cuttings (since many of these places actually have no budget for new plants) that of the three levels of hanging basket/troughs the top level could have geraniums and succulents, the middle busy lizzies and the bottom in the shade could have spider plants and tradescantia.

Orchids and begonias would also be wonderful too as there needs to be a mixture of foliage and flowers and they need to also be tough, withstanding mealy bug which took out a lot of syngoniums (or arrow plants) because watering three times a week can take at least an hour! So Beth if you reading this thanks for all your plants and inspiration and encouraging my green fingers. I hope your new home will be settled soon and you can get your garden growing again.