The Battle is Won

Hurrah!
The War of the Roses has been won, and we finally defeated the flower carpet rose today.  I was tackling the one that had sprung up creeping its nasty thorns near the feijoa tree today and managed to pull it out by the roots and plant a big spider plant on top.

Then, leaving no prisoners I decide the one near the maple tree had to go. It was a big tough mama that had needed a wire cage and wouldn't budge. Previously I had tried to smother it with a bucket or old wok but it just grew again like medusa. Well I got the spade and fork out and kept digging away, then called reinforcements (Dad) and he dug around too. Then we found it had wrapped itself around a maple root and so Dad had to cut it away with a saw. I got the pruning shears and lopped off all the thorns which we going to burn...and the stump eventually got prised loose from the maple root after an intense battle that nearly had us both giving up.

Dad suggested we poison it and burn it but I thought, if we poison it, won't the maple tree get poisoned too? And how can we burn it when it's still in the ground?
But now its chopped to smithereens it will be sayanora flower carpet rose which was going all black spotty anyway. Best to burn it I suppose now it's resting in pieces, because I do not want a night of the living dead zombie rose scenario where we destroy one and a thousand more pop up in its stead. Whoever invented or bred the flower carpet rose must have been a sadist. I don't know what they were thinking, but the carpets I know do NOT have thorns in them.

Now the pit where its loosed from is now full of volcanic rocks and a succulent, and I'm thinking won't boston ferns look pretty there and have a woodland effect, or maybe...more snow in summer? Or maybe a true mat of soft fluffy lambs ears that you can actually walk on...wouldn't that be more 'carpet'?
I have tried most things but now its the realm of jonquils which have flowered although not as many as I would like, to be really wondrous you need hundreds of them.

Anyway, I did not take a photo of my triumph because I was too distracted by the gorgeous magnolia bud that has just started to bloom. I love the colour. So here is a photo of Mt Asher's jewel. 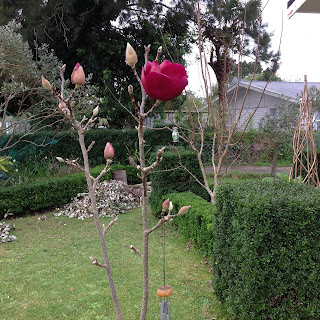