Have you ever been neglected as a child?

The poor second born will only get attention when it's urgent.

Crying out for food and water? Oh no, the second born is just being a nuisance now.

Well its just like that with gardens. Often the second born will be the one that has to prepare to be sacrificed, because nobody can really bear to part with the first born.

I'm only musing this because every garden mother may feel this when she has too many children and not enough hands. Do mothers ever sacrifice their children, well yes that still happens in todays day and age they just call it abortion.

Now imagine how the garden feels when you neglect it. It's been crying out but the powers that be, or the providers - the dads, have failed to provide. Child,  what child? I didn't even know we had one. Garden, what garden? Oh you mean the area around the house thats full of weeds. Just spray the lot. Kill everything. Then you won't have the problem of looking after it.

Some people decide they want to hire a garden nanny. If they are rich and have the funds. But what a job for the garden nanny! After months, years of neglect, the garden is wild and undisciplined and hard work. And it won't be 'fixed' in just two weeks.

I was once a garden nanny. I looked after gardens where the owners had decided that they just didn't have the time, they were too busy sipping mai tais on the beach. They dropped in only occasionally to look at their profit margin.

The problem with being a nanny is that you may fall in love with your charges. The charges may look to YOU as their real mother. But reality is there will come a time when you have to leave. The children may be grown up but they never forget the nurture you provided.

I don't really go back to see whats become of the gardens I once looked after. I think it would break my heart to know that these garden owners couldn't even look after their own gardens, never touch them or care for them again but needed to hire someone else to do it. That's always the problem isn't it. I don't mind helping out, but you kind of wonder what legitimate reason these garden owners have for not looking after their own gardens, the ones they themselves planted? What could possibly be more important than having a garden so you can have food and fresh air around you?

Dad took a photo of my sunflower..it was the only sunflower that survived I grew from seed. It's not very tall but...it actually grew in my clay soil so hooray. 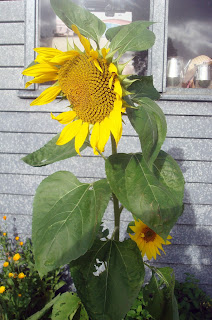