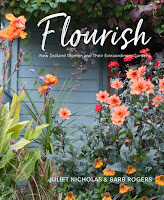 I've finally got round to reading and looking at Flourish, New Zealand Women and Their Extraordinary Gardens, a sumptuously photographed coffee-table book about 26 green fingered women, from all around the country and their unforgettable gardens.

The authors, journalist and photojournalists Juliet Nicholas and Barb Rogers, came up with this clever idea for a book. So they went round visiting these gardens and taking photos and talking to women who's hobby, or was it obsession... resulted in some amazing gardens, some of which are open to the public.

There's a permaculture one and one that's become a community garden, because the lady started gardening the vacant lot next door. There's a few married to wealthy architects. Actually quite a few, although some are widowed and had downsized to smaller plots. Many garden in the English  tradition but a few have gone completely modern and have given up clipped hedges and flowery perennials in favour of year round bromeliads, succulents and natives.

So move over Monty Don going round the world in 80 gardens..this pair went round New Zealand in 26. If they can get a TV series going I'm all eyes. Speaking of TV which I haven't tuned in for ages, on Fridays they are showing Love Your Garden which is a British TV show like Mucking In used to be, about people who go and transform someone else's weed infested bottlestrewn wasteland into paradise.

Ok maybe I'm being dramatic but lets face it that's what some of us have to start with.  Topsoil been scraped away by developers...? They sell it back to you but its completely worthless because they've killed all the worms and beneficial bacteria. The building contractors have left lead and asbestos and mercury from their building materials, and worse, maybe your land was former toxic landfill and been sprayed with DDT and other nasty pesticides. And the remaining soil has been compacted by bulldozers to be as hard as concrete. Great for building a house or apartment block on, not so great for gardening.

So how to flourish when that's been our lot? This book doesn't really address that, as quite a number of woman just decided to retire and make their holiday home their garden. Fair enough but what about the rest of us who don't have extra nest egg holiday homes? And can't just call up our garden landscape designer friends? I'm sure there's a bit more to it than spending a fortune and a lifetime planting loads of plants in cleverly designed layouts. Nothing much is really said about the soil except for a lot of digging and broadforking by willing slave husbands. And maybe some seaweed drenches.

I found another book that I'm going to read called Gardening with Biochar. It promises to 'Supercharge your soil with Bioactivated Charcoal'  to *grow healthier plants *create nutrient-rich soil and *increase your harvest.

If it works I'll let you know, but after I've tried this stuff called CPP - Cowpat Pit. It's well, cow pats but especially biodynamically activated, and promises when swirled around and sprayed in the right moon phase, to make my soil come alive and make all my plants grow healthy and strong.  Yes please!