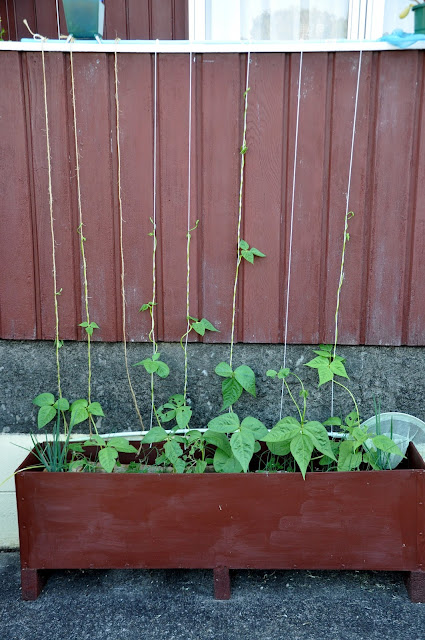 The beans have now climbed over the wall since this last photo was taken and I'm not really sure where they can go next unless we string them from the roof, but they have taken off.

I also have tomato and watermelon, which I have planted at Woodside and given some to school as there is not much room at home.

I bought some thyme and a lemongrass to maybe plant behind the strawberries by the frangipani but I'm not certain the soil is good enough to sustain life there, as I suspect there's still old plastic underneath all the mulch I've added, that's killing anything that might grow there.

The days are getting warmer and soon it will be time to have bbq or garden party, not to mention Christmas celebrations. Although I do remember one year mum banned me from Christmas as she thought I had gone overboard with decorating the house. Apparently you only meant to decorate INSIDE not outdoors and not put 'Merry Christmas' on the fence.

I'm on watering duty at Woodside on Fridays and have planted my tamarillo amongst the citrus too. Again there's no room at the inn..and no beds available at home so it's bedded down in a manger of car tyre and mulch.

I have just been admonished for not being on egg watch while I was trying to sort out library homework and now am not allowed to eat any of Martha's eggs which she kicks and pecks as soon as she lays them. I don't think it's a big loss though as she clearly doesn't like anybody else except for her own sweet self eating them. After mum's tirade of being the daughter who never does anything I just about ran away from home again. Tonight I may be lucky to have dinner on sufferance or I will just drive up to KFC or Nandos and get my revenge on Martha by tucking in to a finger-lickin good meal ALL BY MYSELF.

Ah the joys of living at home. Peace everyone.